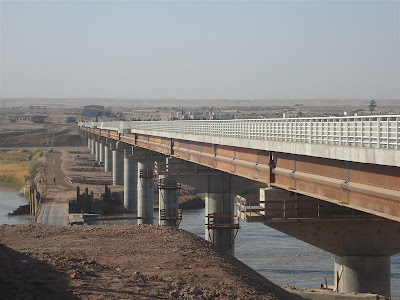 Allow me to use this McClatchy article on another Bush administration legacy leg, as a springboard for insulting Ann Coulter. Why not, she needs it. She also needs a particular procedure with a baseball bat, sponge baseball bat of course. (Recall Coulter describing the murdered abortion providers as having had a procedure with a rifle.)

Essentially the 2007 built US Army Corp bridge that connects Afghanistan to Tajikistan is now a major drug pipeline for heroin, Afghanistan's major export. No need for further sarcasm at this juncture.

Today, the bridge across the muddy waters of the Panj River is carrying much more than vegetables and timber: It's paved the way for drug traffickers to transport larger loads of Afghan heroin and opium to Central Asia and beyond to Russia and Western Europe.

While BV$H and his corrupt cronies attached to the Army Corp etc. were busy building bridges for Heroin traffickers in the ME or wherever bridges here were literally collapsing and killing Americans. His criminal war and it's institutionalized robbery of the American taxpayer continues even today under the spineless, clueless Dinocrats. It's all a disgrace. In the mean time Nat'l Health Care reform founders because these same spineless DINOCRATS are to busy thinking of ways to once again feather the nests of the same people causing the Crisis. Is this really CHANGE? Forget about CHANGE we can believe in, I mean CHANGE period?

Somewhere along the line it occurred to America's power elite that their control would be best served and maintained if America's general population was more like that of an emerging third world nation. I think the entire financial collapse attached to free and easy credit was their coup d'etat. Look at how many people they took down and take down, roughly 600,000 per week at the present rate. Add into that increasing foreclosures, worthless health insurance, 401 K's and such cut literally in half and voila we are on the road to third world-ness. Michael Jackson served them well, he is still capable of taking a revolution of a major country off the news headlines, remember how he took all kinds of news off the headlines in the past. Distraction is a key element.

America has become a battle field where predator Corps. look for victims to eat. The Ins. business is totally organized along PT barnum's famous saying that there is a sucker born every second. Throw in WC Field's infamous quote " Never give a sucker an even break" and you have the essence of our present society. It's the hunters and the hunted. No wonder GOPers didn't even flinch when their hero Dick Cheney gunned down his own buddy and then didn't even apologize. Look at their almost pathological obsession with the 2nd Ad. These are scary people.