I am supporting Jonathan Tasini for Democratic Senator for New York. It is my hope that he will replace Hillary Clinton's seat as New York Senator.

Its very simple. Tasini supports the immediate withdrawal of troops from Iraq, as do I.
Hillary Clinton supports more of the same in Iraq and I do not support that view.

I was opposed to this war from the outset aware that the neo-conservative "Project for A New American Century" was behind all of the reasonings, rhetoric, and the skewered justifications.

I will be posting on the neo-conservatives. In short they are an extremist radical militant group pushing the notion of endless American War. Their goal is a world dominated by American Corporatism achieved through unparalleled military superiority. They of course see themselves as the rightful heirs to this throne, the new world leaders. These people like war and want more of it. Their first practice war is the present Iraq War. Iraq was a theoretical good first choice in their opinion because it possessed no WMD and was an inconsequential threat to the United States. Nothing in their document expresses any concern about the cost of endless war. They express human life costs as a regrettable consequence. The majority of neo-conservatives have no actual military experience themselves. Amazingly Hillary Clinton chose to side with this cabal.

Support Tasini
Posted by Jim Sande at 10:01 AM No comments:

Berkley, California will have a new addition to its November 2006 election ballot. There will be a referendum on the ballot asking for a yea or nay to impeach George Bush. Of course only Congress can impeach a president.
What I like about this, is the possibility that other cities and towns will decide to have a similar referendum in their communities. So its up to you, can you get your city council and city leaders to follow the example being set by Berkeley?
more on impeachment here
Posted by Jim Sande at 10:23 AM 1 comment:

Principals in the company that was in charge of security for the World Trade Center during the period that included 9-11:
Marvin Bush, the brother of George W. Bush.
Wirt Walker III, the cousin of George W. Bush
The name of that security company - Stratesec

suggested reading: David Ray Griffin
Posted by Jim Sande at 9:58 AM No comments:

1. "a political system in which all power of government is vested in a person or group with no other power to balance and limit the activities of the government. Fascist governments are often closely associated with large corporations and sometimes with extreme nationalism and racist activities. Modern fascism is often called corporatism."
Can any of you think of a president that is pushing for unlimited power and the right to break any laws made by Congress, say wiretapping for example. Isn't that called the unitary presidency? "Corporatism", interesting, can we think of any place were the role and power of corporations greatly exceeds that of individuals?

2. "A political philosophy, movement, or regime that exalts the nation above the individual; characterized by a centralized government and headed by a dictatorial leader."
Let's see our very own Supreme Court just made it A-OK for the police to not even bother to knock and come right on into your home and arrest you. I'm gonna think that this just might be a case where the rights of the nation exceeds that of the individual.

3. "Fascism, which was not afraid to call itself reactionary... does not hesitate to call itself illiberal and anti-liberal." Benito Mussolini
Anti-liberal, hey wait a minute, Isn't there someone out there maybe a group of people, who is calling for all liberals in this country to be shot, Give ya a hint...Rush, Rush who? Ann, Ann who? Sean, Sean who? Fox **** Fox what?
Posted by Jim Sande at 10:25 AM No comments:

In response to the utter absurdity found in American politics as of late, and by that I mean statements (and using the term statement is a politeness) coming from the extremists on the radical right, I am posting some music today. After all when logic and the truth fail, there's not too many things left.

This is from my new CD 'Particle.' Its the only cut with guitars.

Meta Turn
Posted by Jim Sande at 10:02 AM No comments:

Just prior to President Bush's surprize visit to Iraq, a cable was secretly sent from the American Embassy in Baghdad to The Washington Post.

The cable details the day to day lives of Iraqi citizens who work in the Green Zone. To say that life is harsh in Baghdad is an extreme understatement.

Here you will find the actual cable in PDF format.
Posted by Jim Sande at 7:48 AM No comments:

No need to go into details, but its something humorous for the weekend.
Posted by Jim Sande at 10:30 AM No comments:

The 'Frontline' episode 'The Dark Side', focuses on the Vice President and his role in "The War on Terror." He is the most important individual in involved in its execution. Here is a quote made by Dick Cheney on August 26, 2002 in the run up to the war: "Simply stated, there is no doubt that Saddam Hussein now has weapons of mass destruction. There is no doubt that he is amassing them to use against our friends, against our allies, and against us..... Saddam has resumed his efforts to acquire nuclear weapons......."

During this speech which appears to have taken place in front of a crowd of Vets, Cheney is forceful, he is direct, and he is authoritative in his demeanor and in his body language. He is speaking with tremendous power and confidence. Cheney also presented this speech numerous times including on TV, shows like 'Meet the Press' and such.

Of course nothing that Cheney stated then, turned out to be true. No WMD found, and yet he still continues with this direction.

Based on appearances of this same type given by Cheney in the run up to the Iraq War, there are those people who still literally believe these statements. This is stunning, quite the thing to behold. I regularly talk with a person who holds this belief, he maintains WMD were found.

No WMD were found whatsoever and the ordinary person can easily find this out with five minutes of light research. Even this week, 'the' Pentagon disputed Senator Santorum claims that WMD have been found. As Santorum is presently trailing by 15 percentage points in his Senate re-election bid, one can understand his recent flourish to instill yet again, the politics of fear and lies as stated by Dick Cheney. Curiously, Fox News has decided to ignore the Pentagon and run with Santorum's views. Fox News is reinforcing the notion that WMD were found in Iraq. Any ideas on where my friend gets his information?

Watch the Frontline episode here: http://www.pbs.org/wgbh/pages/frontline/darkside/view/
Posted by Jim Sande at 9:05 AM No comments:

A nice article on George Bush's popularity in Europe
(hint: They do not like him, with poll numbers even lower than here in the US)
http://www.msnbc.msn.com/id/13468342/site/newsweek/

I watched this film online, its free, its about an hour long.
Up to this point I have not been a 9-11 conspiracy type. I do resent the frequent use of the term conspiracy. It seems to be used to quell any dissent and consequently assign a degree of absurdity on the individual. Anyhow the film is free and I must say the evidence presented, particularly the evidence surrounding the attack on the Pentagon, is compelling.
http://video.google.com/videoplay?docid=-2023320890224991194
Posted by Jim Sande at 7:38 AM 2 comments:

The site to find out who to send campaign funds to is: http://www.actblue.com/

Send a campaign contribution to Ned Lamont
http://nedlamont.com/
He can beat Lieberman.
Posted by Jim Sande at 1:35 PM No comments:

Writing on the ridge

An excerpt from the writing of Martin Buber. This one falls under the title "The Third Alternative" and is from the book 'The Way of Response.'
"On the far side of the subjective, on this side of the objective, on the narrow ridge, where I and Thou meet, there is the realm of 'between'."

This is from my writing journal:
The ridge is the real test. Which way can you fall, left or right. Can you walk straight ahead, balancing as on a high beam or high wire. Do you retreat, back walk or twirl and run. The quality and speed of a retreat is memorable. One can imagine an army retreating so quickly as to cause utter confusion to the other side. Consequently there could be a victory in retreat through its distortion of the enemy's perception, like throwing rocks into a gear mechanism. But there is another choice. You can rest on the ridge. Stop. Look at the view and adjust to the scenery. Let your mind catch up to the new location.
Posted by Jim Sande at 6:57 AM No comments:

Happy to see Lamont is getting more endorsements in Connecticut. Also notice that Al Gore is not endorsing Lieberman.

I saw Gore's movie "An Inconvenient Truth." After seeing it I gotta think that Gore wants to run for President as quite alot of the movie deals with a look at Al Gore. Why would he need to put so much personal detail of himself in the movie otherwise.

My first prediction on the second day of my blog, Al Gore will run in 2008.
Posted by Jim Sande at 3:27 PM No comments:

A place for ideas, thoughts, shared information, and anything that fits in inbetween, including the political, apolitical, local, global, and secretive.
Posted by Jim Sande at 5:44 PM No comments: 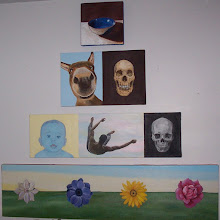 acrylic on canvas 5 feet by 5 feet